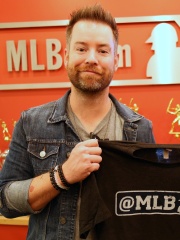 David Roland Cook (born December 20, 1982) is an American rock singer-songwriter. Cook rose to fame after winning the seventh season of American Idol in 2008. Prior to Idol, Cook formed a high school band that released three studio albums and four live albums before releasing his first solo independent album, Analog Heart. After winning American Idol, he released his debut single "The Time of My Life", which entered the Billboard Hot 100 charts at number three and at number two on the Billboard Canadian Hot 100, selling over 1.4 million copies and being certified platinum by the RIAA. His major-label self-titled debut album was released on November 18, 2008, and has also since been certified platinum by the RIAA. Read more on Wikipedia