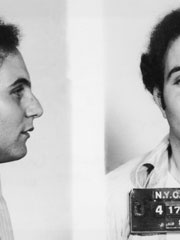 David Richard Berkowitz (born Richard David Falco, June 1, 1953), also known as the Son of Sam and the .44 Caliber Killer, is an American serial killer who pleaded guilty to eight separate shooting attacks that began in New York City during the summer of 1976. Berkowitz grew up in New York City and served in the U.S. Army before committing his crimes. Using a .44 caliber Bulldog revolver, he killed six people and wounded seven others by July 1977. Read more on Wikipedia

Since 2007, the English Wikipedia page of David Berkowitz has received more than 8,859,767 page views. His biography is available in 22 different languages on Wikipedia making him the 109th most popular extremist.