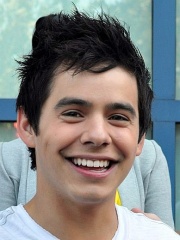 David James Archuleta (born December 28, 1990) is an American singer-songwriter and actor. At ten years old, he won the children's division of the Utah Talent Competition leading to other television singing appearances. When he was twelve years old, Archuleta became the Junior Vocal Champion on "Star Search 2". Read more on Wikipedia

Since 2007, the English Wikipedia page of David Archuleta has received more than 1,969,872 page views. His biography is available in 36 different languages on Wikipedia making him the 2,576th most popular singer.

Among singers, David Archuleta ranks 2,591 out of 3,001. Before him are Sayumi Michishige, Cleopatra Stratan, LaFee, Christine Guldbrandsen, Reina Tanaka, and Galena. After him are Sandra Nurmsalu, Keisha Buchanan, Frans Jeppsson Wall, Mack 10, Meek Mill, and May'n.