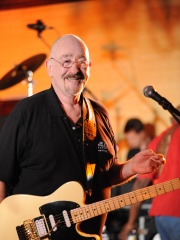 David Thomas Mason (born 10 May 1946) is an English singer-songwriter and guitarist from Worcester, who first found fame with the rock band Traffic. Over the course of his career, Mason has played and recorded with many notable pop and rock musicians, including Paul McCartney, George Harrison, the Rolling Stones, Jimi Hendrix, Eric Clapton, Michael Jackson, David Crosby, Graham Nash, Steve Winwood, Fleetwood Mac, Delaney & Bonnie, Leon Russell and Cass Elliot. One of Mason's best known songs is "Feelin' Alright", recorded by Traffic in 1968 and later by many other performers, including Joe Cocker, whose version of the song was a hit in 1969. Read more on Wikipedia

Since 2007, the English Wikipedia page of Dave Mason has received more than 1,215,412 page views. His biography is available in 17 different languages on Wikipedia making him the 1,703rd most popular musician.