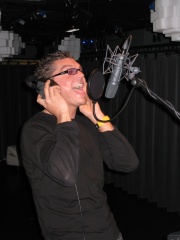 Danzel (born Johan Waem, 9 November 1976) is a Belgian musician, best known for his 2004 single "Pump It Up!" which reached the top 10 across Europe, including in Austria, Belgium, Denmark, France, Germany, Ireland, Italy, Romania and Switzerland. The single also reached number 11 on the UK Singles Chart and 29 on the U.S. Billboard Hot Dance Club Play chart. Read more on Wikipedia

Since 2007, the English Wikipedia page of Danzel has received more than 98,973 page views. His biography is available in 15 different languages on Wikipedia. Danzel is the 1,973rd most popular singer, the 674th most popular biography from Belgium and the 19th most popular Belgian Singer.

Page views of Danzels by language

Among singers, Danzel ranks 1,973 out of 3,541. Before him are Willy William, M. Pokora, Wendy, Arabian Prince, Geir Rönning, and Solar. After him are Melba Moore, Wilfried, Slim Thug, Aya Nakamura, Jordan Knight, and Elize Ryd.