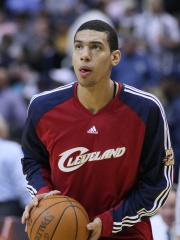 Daniel Richard Green Jr. (born June 22, 1987) is an American professional basketball player for the Los Angeles Lakers of the National Basketball Association (NBA). He played college basketball for the University of North Carolina (UNC), where he played in more games (145) and had more wins (123) than any Tar Heel before him. Read more on Wikipedia

Since 2007, the English Wikipedia page of Danny Green has received more than 34,423 page views. His biography is available in 23 different languages on Wikipedia making him the 329th most popular basketball player.

Among basketball players, Danny Green ranks 333 out of 925. Before him are Robertas Javtokas, Walter Davis, Baron Davis, Nenê, Anne Donovan, and John Starks. After him are Jason Terry, Latrell Sprewell, Chris Andersen, Mahmoud Abdul-Rauf, A. C. Green, and Kevin Willis.