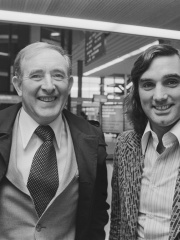 Robert Dennis "Danny" Blanchflower (10 February 1926 – 9 December 1993) was a Northern Ireland international footballer who played for and captained Tottenham Hotspur, most notably during its double-winning season of 1960–61. He played as a defensive midfielder at right half and was known particularly for his accurate passing, his ability to dictate the tempo of the game and his inspiring leadership.. After a lengthy playing career, he retired at the age of 38 and became a respected football journalist, and later a football manager. Read more on Wikipedia

Since 2007, the English Wikipedia page of Danny Blanchflower has received more than 267,513 page views. His biography is available in 25 different languages on Wikipedia making him the 2,223rd most popular soccer player.