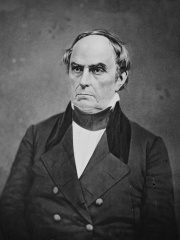 Daniel Webster (January 18, 1782 – October 24, 1852) was an American lawyer and statesman who represented New Hampshire and Massachusetts in the U.S. Congress and served as the U.S. Secretary of State under Presidents William Henry Harrison, John Tyler, and Millard Fillmore. As one of the most prominent American lawyers of the 19th century, he argued over 200 cases before the U.S. Supreme Court between 1814 and his death in 1852. Read more on Wikipedia

Among politicians, Daniel Webster ranks 11,122 out of 15,710. Before him are Alejandro Maldonado, Shehbaz Sharif, Dobri Bozhilov, Machanidas, Æthelheard of Wessex, and Tibor Szamuely. After him are Dragutin Šurbek, Ahmed Aboutaleb, Henryk Jabłoński, Ali Akbar Velayati, Valeriu Muravschi, and Princess Amelia of Great Britain.