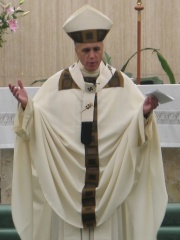 Daniel Nicholas DiNardo (born May 23, 1949) is an American cardinal of the Catholic Church. He is the second and current Archbishop of Galveston-Houston, serving since 2006. He previously served as Bishop of Sioux City from 1998 to 2004. Read more on Wikipedia

Since 2007, the English Wikipedia page of Daniel DiNardo has received more than 163,008 page views. His biography is available in 17 different languages on Wikipedia making him the 1,965th most popular religious figure.

Among religious figures, Daniel DiNardo ranks 1,953 out of 2,001. Before him are Abdul Rahman, He Pingping, Aleksandr Kurlovich, Edward Bouverie Pusey, Timothy M. Dolan, and Rufino Santos. After him are Abdelhamid Abaaoud, Epiphanius I of Ukraine, Margot Käßmann, Trinley Thaye Dorje, Ogyen Trinley Dorje, and Mauro Fiore.