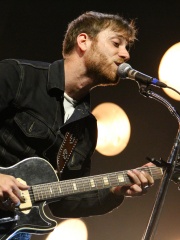 Daniel Quine Auerbach (born May 14, 1979) is an American musician, singer-songwriter, and record producer, best known as the guitarist and vocalist of the Black Keys, a blues rock band from Akron, Ohio. As a member of the group, Auerbach has recorded and co-produced eleven studio albums with his bandmate Patrick Carney. Auerbach has also released two solo albums, Keep It Hid (2009) Waiting on a Song (2017), and formed a side project, the Arcs, which released the album Yours, Dreamily, in 2015.Auerbach owns the Easy Eye Sound recording studio in Nashville, Tennessee, as well as a record label of the same name. Read more on Wikipedia