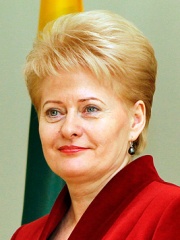 Dalia Grybauskaitė (Lithuanian pronunciation: ​[dɐˈlʲɛ ɡʲrʲiːbɐʊsˈkɐ̂ˑɪtʲeː]; born 1 March 1956) is a Lithuanian politician who served as the eighth President of Lithuania from 2009 until 2019. She is the first woman to hold the position and became in 2014 the first President of Lithuania to be reelected for a second consecutive term.Grybauskaitė has served as Minister of Finance, as well as European Commissioner for Financial Programming and the Budget from 2004 to 2009. Read more on Wikipedia

Dalia Grybauskaitė is the president of Lithuania. She was elected in 2009 and re-elected in 2014. She is most famous for her work as president.

Among politicians, Dalia Grybauskaitė ranks 3,127 out of 15,710. Before her are Yitzhak Navon, Maria of Yugoslavia, Emperor Ōjin, Cao Mao, Mariano Rajoy, and Emperor Suinin. After her are Emperor Qinzong, Catherine of Sweden, Countess Palatine of Kleeburg, Anatoly Lunacharsky, Goujian, Bahram II, and Gottlob Berger.