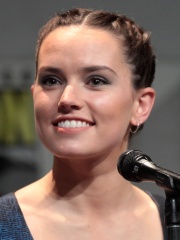 Daisy Jazz Isobel Ridley (born 10 April 1992) is an English actress who rose to international prominence through playing the lead role of Rey in the Star Wars sequel trilogy: The Force Awakens (2015), The Last Jedi (2017), and The Rise of Skywalker (2019). She has also featured as the title character of the romantic drama Ophelia (2018), appeared in the mystery film Murder on the Orient Express (2017), and lent her voice to the animated Peter Rabbit (2018). Read more on Wikipedia

Since 2007, the English Wikipedia page of Daisy Ridley has received more than 17,163,172 page views. Her biography is available in 47 different languages on Wikipedia making her the 5,074th most popular actor.