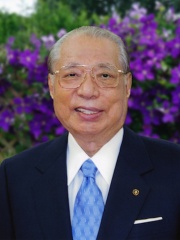 Daisaku Ikeda (池田 大作, Ikeda Daisaku, born 2 January 1928) is a Japanese Buddhist philosopher, educator, author, and nuclear disarmament advocate. He has served as the third president and then honorary president of the Soka Gakkai, the largest of Japan's new religious movements. Ikeda is the founding president of the Soka Gakkai International (SGI), the world's largest Buddhist lay organization, which declares approximately 12 million practitioners in 192 countries and territories, of whom more than 1.5 million reside outside of Japan as of 2012.Ikeda was born in Tokyo, Japan, in 1928, to a family of seaweed farmers. Read more on Wikipedia

Since 2007, the English Wikipedia page of Daisaku Ikeda has received more than 428,292 page views. His biography is available in 19 different languages on Wikipedia making him the 671st most popular philosopher.

Among philosophers, Daisaku Ikeda ranks 669 out of 1,005. Before him are Jean Ziegler, Étienne Balibar, Jean-Marie Guyau, Franz Xaver von Baader, Aristo of Chios, and Antony Flew. After him are Jan Mukařovský, Georges Politzer, Johannes Sturm, Calcidius, Joseph Albo, and Abhinavagupta.