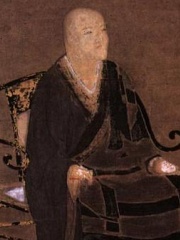 Dōgen Zenji (道元禅師; 26 January 1200 – 22 September 1253), also known as Dōgen Kigen (道元希玄), Eihei Dōgen (永平道元), Kōso Jōyō Daishi (高祖承陽大師), or Busshō Dentō Kokushi (仏性伝東国師), was a Japanese Buddhist priest, writer, poet, philosopher, and founder of the Sōtō school of Zen in Japan. Originally ordained as a monk in the Tendai School in Kyoto, he was ultimately dissatisfied with its teaching and traveled to China to seek out what he believed to be a more authentic Buddhism. He remained there for five years, finally training under Tiantong Rujing, an eminent teacher of the Chinese Caodong lineage. Read more on Wikipedia

Since 2007, the English Wikipedia page of Dōgen has received more than 444,694 page views. His biography is available in 38 different languages on Wikipedia (up from 37 in 2019). Dōgen is the 579th most popular religious figure (down from 529th in 2019), the 76th most popular biography from Japan (down from 71st in 2019) and the 3rd most popular Japanese Religious Figure.

Dōgen is most famous for his philosophical work "The Shōbōgenzō" and his establishment of the Soto school of Zen Buddhism.

Page views of Dōgens by language

Among religious figures, Dōgen ranks 579 out of 2,272. Before him are Pope Theodore I, Pope Leo VII, Norbert of Xanten, Pope Damasus II, Nichiren, and Epiphanius of Salamis. After him are Charles de Foucauld, Saint Menas, Peter Lombard, Zayd ibn Thabit, Angela Merici, and Kane Tanaka.

Among people born in 1200, Dōgen ranks 4. Before him are Pope Urban III, Pope Alexander IV, and Pope Celestine IV. After him are Qutuz, Zhang Sanfeng, Villard de Honnecourt, Nicholas Kanabos, Muhammad al-Nasir, Doquz Khatun, Shiban, and Joan, Countess of Flanders. Among people deceased in 1253, Dōgen ranks 2. Before him is Clare of Assisi. After him are Theobald I of Navarre, Robert Grosseteste, Violant of Hungary, Wenceslaus I of Bohemia, Theodore Komnenos Doukas, Otto II, Duke of Bavaria, Henry I of Cyprus, Vykintas, and Amadeus IV, Count of Savoy.