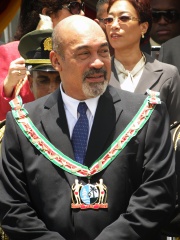 Desiré Delano "Dési" Bouterse (Dutch pronunciation: [ˈdesɪ ˈbʌutəɾsə]; born 13 October 1945) is a Surinamese military officer, politician, convicted murderer and drug trafficker who served as President of Suriname from 2010 to 2020. From 1980 to 1987, he was Suriname's de facto leader after conducting a military coup and establishing a period of military rule. In 1987, Bouterse founded the National Democratic Party (NDP). Read more on Wikipedia

Dési Bouterse is most famous for being the president of the country of Haiti.

Among politicians, Dési Bouterse ranks 2,138 out of 15,710. Before him are Leonid Kravchuk, Shajar al-Durr, Kara Ahmed Pasha, Moctezuma I, Emperor Annei, and Al-Hakam II. After him are Atossa, Bumin Qaghan, Alexander of Battenberg, Munjong of Joseon, Géza I of Hungary, and Nur Muhammad Taraki.

Others born in Suriname

Among POLITICIANS In Suriname