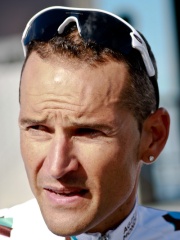 Cyril Dessel (born 29 November 1974 in Rive-de-Gier, Loire) is a former French professional road racing cyclist, who competed as a professional from 2000 to 2011.In 2006, he won the Tour Méditerranéen on the UCI Europe Tour. Then in the 2006 Tour de France, he finished second in the tenth stage, taking the leader's yellow jersey for a day and the lead in the King of the Mountains competition; he eventually finished sixth. Read more on Wikipedia

Since 2007, the English Wikipedia page of Cyril Dessel has received more than 10,359 page views. His biography is available in 21 different languages on Wikipedia making him the 608th most popular cyclist.