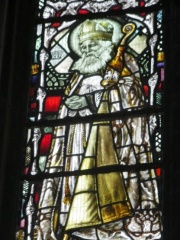 Cuthbert of Lindisfarne (c. 634 – 20 March 687) was a Catholic Anglo-Saxon saint of the early Northumbrian church in the Celtic tradition. He was a monk, bishop and hermit, associated with the monasteries of Melrose and Lindisfarne in the Kingdom of Northumbria, today in north eastern England and South Eastern Scotland. Both during his life and after his death he became a popular medieval saint of Northern England, with a cult centred on his tomb at Durham Cathedral. Read more on Wikipedia

Page views of Cuthberts by language

Among religious figures, Cuthbert ranks 1,518 out of 2,238. Before him are Federico Borromeo, Nicolaus Olahus, Zadok, Dagobert of Pisa, Plutarch of Byzantium, and Willibald. After him are Gisela, daughter of Louis the Pious, Maria Restituta Kafka, Onufriy, John X of Antioch, Saint Fiacre, and Peter Martyr Vermigli.