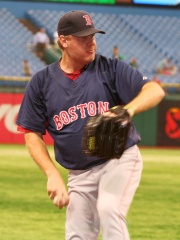 Curtis Montague Schilling (born November 14, 1966) is an American former Major League Baseball right-handed pitcher and currently a commentator for BlazeTV. He helped lead the Philadelphia Phillies to a World Series appearance in 1993, and won championships in 2001 with the Arizona Diamondbacks and in 2004 and 2007 with the Boston Red Sox. Schilling retired with a career postseason record of 11–2, and his .846 postseason winning percentage is a major-league record among pitchers with at least ten decisions. He is a member of the 3,000 strikeout club and has the highest strikeout-to-walk ratio of any of its members. Read more on Wikipedia