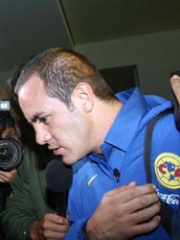 Cuauhtémoc Blanco Bravo (Spanish pronunciation: [kwawˈtemok ˈblaŋko]; born 17 January 1973) is a Mexican politician and former professional footballer who is the current Governor of Morelos under the coalition Juntos Haremos Historia. He formerly served as the municipal president of Cuernavaca, Morelos. As a footballer, Blanco was known for his attacking ability and played most of his career as a deep-lying forward and his last years as an attacking midfielder. Read more on Wikipedia

Since 2007, the English Wikipedia page of Cuauhtémoc Blanco has received more than 736,616 page views. His biography is available in 43 different languages on Wikipedia making him the 2,242nd most popular soccer player.