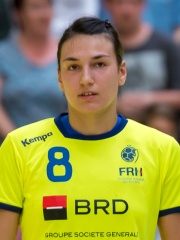 Cristina Georgiana Neagu (Romanian pronunciation: [krisˈtina ˈne̯aɡu]; born 26 August 1988) is a Romanian professional handballer who plays as a left back for CSM București and the Romanian national team. Often considered the best player in the world and rated by many in the sport as the greatest of all time, Neagu is the only female handball player in history to win four IHF World Player of the Year awards (in 2010, 2015, 2016 and 2018). She also won the EHF Player of the Year award in 2017 and 2018. Read more on Wikipedia

Since 2007, the English Wikipedia page of Cristina Neagu has received more than 201,070 page views. Her biography is available in 23 different languages on Wikipedia making her the 36th most popular handball player.

Most Popular Handball Players in Wikipedia