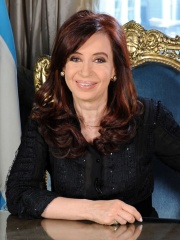 Cristina Elisabet Fernández de Kirchner (Spanish pronunciation: [kɾisˈtina eˈlisaβet ferˈnandes ðe ˈkiɾʃneɾ] (listen); born 19 February 1953), often referred to by her initials CFK, is an Argentine lawyer and politician who is serving as the 37th Vice President of Argentina since 2019. She also previously served as the President of Argentina from 2007 to 2015 and the first lady during the tenure of her husband, Néstor Kirchner. She was the second woman to have held the Argentine presidency, the first directly elected female president, and the first woman re-elected to the office. Read more on Wikipedia

Cristina Fernández de Kirchner is most famous for being the president of Argentina from 2007 to 2015.

Among politicians, Cristina Fernández de Kirchner ranks 1,833 out of 15,710. Before her are Wang Zhaojun, Prince Maximilian of Baden, Karl Renner, Eric the Victorious, Walther Rathenau, and Quintus Sertorius. After her are Ignacy Jan Paderewski, Hyejong of Goryeo, Brasidas, Jean Parisot de Valette, Ellac, and Stefan Lazarević.