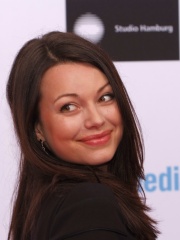 Cosma Shiva Hagen (German: [ˈkɔs.ma ˈʃiː.va ˈhaːɡn̩] (listen); born May 17, 1981 in Los Angeles, California) is a German-American actress and the daughter of the German new wave/punk singer Nina Hagen and the Dutch musician Ferdinand Karmelk. Her grandmother is actress Eva-Maria Hagen, and her step-grandfather is the East German dissident writer Wolf Biermann. Eva-Maria Hagen was allowed to emigrate to West Germany during the 1970s. Read more on Wikipedia

Since 2007, the English Wikipedia page of Cosma Shiva Hagen has received more than 124,316 page views. Her biography is available in 16 different languages on Wikipedia making her the 7,620th most popular actor.