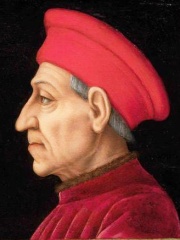 Cosimo di Giovanni de' Medici, called "the Elder" (Italian: il Vecchio) and posthumously "Father of the Fatherland" (Latin: pater patriae) (27 September 1389 – 1 August 1464), was an Italian banker and politician, the first member of the Medici family which effectively ruled Florence during much of the Italian Renaissance. Despite his influence, his power was not absolute; Florence's legislative councils at times resisted his proposals throughout his life, and he was viewed as first among equals, rather than an autocrat. Read more on Wikipedia

Since 2007, the English Wikipedia page of Cosimo de' Medici has received more than 3,735,439 page views. His biography is available in 48 different languages on Wikipedia making him the 14th most popular businessperson.

Among people born in 1389, Cosimo de' Medici ranks 1. After him are Isabella of Valois, Philip II, Count of Nevers, John V, Duke of Brittany, and John of Lancaster, 1st Duke of Bedford. Among people deceased in 1464, Cosimo de' Medici ranks 4. Before him are Pope Pius II, Nicholas of Cusa, and Rogier van der Weyden. After him are Emperor Yingzong of Ming, Blanche II of Navarre, Frederick II, Elector of Saxony, Bernardo Rossellino, Zagan Pasha, Bartolomeo Bon, and Henry Beaufort, 3rd Duke of Somerset.

Among BUSINESSPEOPLE In Italy