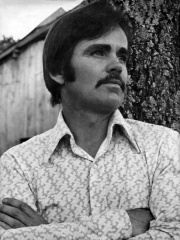 Cormac McCarthy (born Charles Joseph McCarthy Jr., July 20, 1933) is an American writer who has written ten novels, two plays, two screenplays, and two short-stories, spanning the Western and post-apocalyptic genres. He is well known for his graphic depictions of violence and his unique writing style, recognizable by its lack of punctuation and attribution. He is widely regarded as one of the greatest contemporary American writers.McCarthy was born in Providence, Rhode Island, although he was raised primarily in Tennessee. Read more on Wikipedia

Cormac McCarthy is most famous for his novels The Road, No Country for Old Men, and All the Pretty Horses.