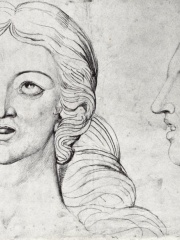 Corinna or Korinna (Ancient Greek: Κόριννα, romanized: Korinna) was an ancient Greek lyric poet from Tanagra in Boeotia. Although ancient sources portray her as a contemporary of Pindar (born c. 518 BC), not all modern scholars accept the accuracy of this tradition. When she lived has been the subject of much debate since the early twentieth century, proposed dates ranging from the beginning of the fifth century to the late third century BC. Corinna's works survive only in fragments: three substantial sections of poems are preserved on second-century AD papyri from Egypt; several shorter pieces survive in quotations by ancient grammarians. Read more on Wikipedia

Corinna is most famous for her poem, "The Lament of Corinna."

Page views of Corinnas by language

Among writers, Corinna ranks 1,040 out of 5,755. Before her are Shoko Asahara, Bāṇabhaṭṭa, Jerome K. Jerome, Marcus Minucius Felix, John Malalas, and Will Durant. After her are Robert Merle, Al-Mutanabbi, Bulat Okudzhava, Sonia Rykiel, Ellen Key, and Bharata Muni.

Others Deceased in 501 BC