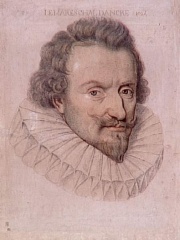 Concino Concini, 1st Marquis d'Ancre (23 November 1569 – 24 April 1617), was an Italian politician, best known for being a minister of Louis XIII of France, as the favourite of Louis's mother, Marie de Medici, Queen of France. Read more on Wikipedia

Concino Concini was most famous for being the husband of Catherine de Medici. He was also a favorite of King Henry IV. Concini was assassinated in 1617.

Among politicians, Concino Concini ranks 2,519 out of 15,577. Before him are Antony Armstrong-Jones, 1st Earl of Snowdon, Barsine, Ludwig Stumpfegger, Berengar II of Italy, Mohammed VI of Morocco, and Otto Ernst Remer. After him are Shamshi-Adad I, Demetrius I Soter, Admetus, Lucius Quinctius Cincinnatus, Maximilian III, Archduke of Austria, and Naser al-Din Shah Qajar.

Among people born in 1575, Concino Concini ranks 5. Before him are Marie de' Medici, Guido Reni, Jakob Böhme, and Gwanghaegun of Joseon. After him are Anne Catherine of Brandenburg, Antoine de Montchrestien, Christoph Scheiner, John Adolf, Duke of Holstein-Gottorp, Diego, Prince of Asturias, Vittoria Aleotti, and Francesco Molin. Among people deceased in 1617, Concino Concini ranks 6. Before him are Ahmed I, Pocahontas, John Napier, Rose of Lima, and Francisco Suárez. After him are Emperor Go-Yōzei, Hendrik Goltzius, David Fabricius, 4th Dalai Lama, Fausto Veranzio, and Dorothea of Denmark, Duchess of Brunswick-Lüneburg.