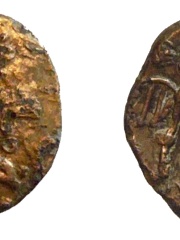 Commius (Commios, Comius, Comnios) was a king of the Belgic nation of the Atrebates, initially in Gaul, then in Britain, in the 1st century BC. Read more on Wikipedia

Since 2007, the English Wikipedia page of Commius has received more than 94,352 page views. His biography is available in 20 different languages on Wikipedia. Commius is the 9,495th most popular politician (down from 6,395th in 2019).

Page views of Commiuses by language

Among politicians, Commius ranks 9,495 out of 15,577. Before him are Mustafa Akıncı, Hussain Muhammad Ershad, Tommy Lapid, Leon Panetta, Gaius Antonius, and Prince Andrew of Yugoslavia. After him are Eriba-Adad I, John II Orsini, Hudjefa I, Lev Karakhan, Panteleimon Ponomarenko, and Ahmad Shah of Pahang.

Among people born in 100 BC, Commius ranks 48. Before him are Lucius Aemilius Lepidus Paullus, Alexander of Judaea, Lucius Cornelius Balbus, Alfenus Varus, Gnaeus Calpurnius Piso, and Sulpicia. After him are Amanishakheto, Quintus Labienus, Tiridates II of Parthia, Dumnorix, Quintus Pedius, and Marcus Lollius. Among people deceased in 100 BC, Commius ranks 19. Before him are Artemidorus Ephesius, Gnaeus Cornelius Lentulus Clodianus, Aretas III, Ariobarzanes I of Cappadocia, Bion of Smyrna, and Archelaus. After him are Amanishakheto, Publius Ventidius Bassus, Lucius Aemilius Lepidus Paullus, Geminus, Hiempsal II, and Lucius Caecilius Metellus Diadematus.