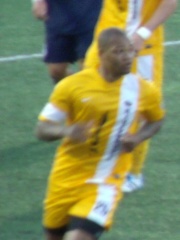 Collins John (born 17 October 1985 in Zwedru) is a Liberian-born Dutch footballer who last played as a forward for Pittsburgh Riverhounds. John notably played in the Premier League for Fulham where he notched up 23 goals in 111 appearances, in all competitions, in a five-year stay at Craven Cottage. He also played in the English football league for Leicester City, Watford, and Barnet, in the Eredivisie for FC Twente and NEC Nijmegen, in Belgium for K.S.V. Read more on Wikipedia

Since 2007, the English Wikipedia page of Collins John has received more than 116,730 page views. His biography is available in 17 different languages on Wikipedia making him the 10,127th most popular soccer player.

Among SOCCER PLAYERS In Liberia