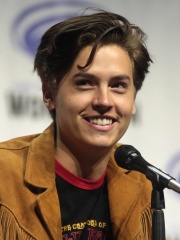 Cole Mitchell Sprouse (born August 4, 1992) is an American actor and photographer. He is known for his role as Cody Martin on the Disney Channel series The Suite Life of Zack & Cody (2005–2008) and its spin-off series The Suite Life on Deck (2008–2011). In his early career, he appeared in various projects alongside his twin brother Dylan Sprouse. Read more on Wikipedia

Among actors, Cole Sprouse ranks 4,443 out of 9,996. Before him are La Jana, James Corden, Kaori Momoi, Matt Frewer, Jang Na-ra, and Ian McNeice. After him are Nina Li Chi, Corbin Bleu, May Britt, Junko Takeuchi, Mark Damon, and Nigel Terry.