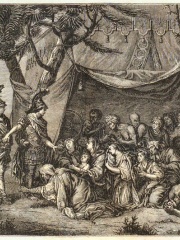 Cleitarchus or Clitarchus (Greek: Κλείταρχος) was one of the historians of Alexander the Great. Son of the historian Dinon of Colophon, he spent a considerable time at the court of Ptolemy Lagus. He was active in the mid to late 4th century BCE. Quintilian (Institutio Oratoria. Read more on Wikipedia

Page views of Cleitarchuses by language

Among people born in 400 BC, Cleitarchus ranks 44. Before him are Polemon, Philip IV of Macedon, Quintus Fabius Maximus Rullianus, Nausiphanes, Gnaeus Flavius, and Cleitus the White. After him are Alexander of Pherae, Anniceris, Polykleitos the Younger, Diodorus Cronus, Agesipolis II, and Publius Decius Mus. Among people deceased in 300 BC, Cleitarchus ranks 19. Before him are Appius Claudius Caudex, Mithridates II of Pontus, Xanthippus of Carthage, Quintus Fabius Maximus Rullianus, Aristo of Chios, and Gnaeus Flavius. After him are Diodorus Cronus, Hermippus of Smyrna, Archidamus IV, Hecataeus of Abdera, Cleombrotus II, and Asclepiades of Samos.