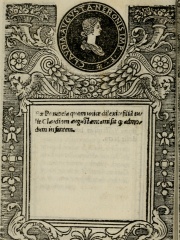 Claudia Augusta (Classical Latin: [ˈklau̯dɪ.a]; January 63 – April 63) was the only daughter of the Roman Emperor Nero by his second wife Roman Empress Poppaea Sabina. She was born in Antium (Anzio) on 21 January 63. Nero honored Claudia and her mother with the title of Augusta. Read more on Wikipedia

Among companions, Claudia Augusta ranks 478 out of 687. Before her are Abd-Allah ibn Jahsh, Geraldine of Albania, Terentia, Sunanda Kumariratana, Mafalda of Portugal, and Landgravine Marie Louise of Hesse-Kassel. After her are Princess Helena of Waldeck and Pyrmont, Theresa of Portugal, Queen of León, Neslişah Sultan, Mariam-uz-Zamani, Maria of Navarre, and William V, Marquess of Montferrat.