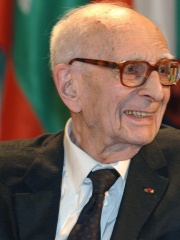 Claude Lévi-Strauss (; French: [klod levi stʁos]; 28 November 1908 – 30 October 2009) was a French anthropologist and ethnologist whose work was key in the development of the theory of structuralism and structural anthropology. He held the chair of Social Anthropology at the Collège de France between 1959 and 1982, was elected a member of the Académie française in 1973 and was a member of the School for Advanced Studies in the Social Sciences in Paris. He received numerous honors from universities and institutions throughout the world and has been called, alongside James George Frazer and Franz Boas, the "father of modern anthropology".Lévi-Strauss argued that the "savage" mind had the same structures as the "civilized" mind and that human characteristics are the same everywhere. Read more on Wikipedia

Claude Lévi-Strauss is most famous for his analysis of the structure of human societies.

Among philosophers, Claude Lévi-Strauss ranks 76 out of 1,089. Before him are William of Ockham, Jürgen Habermas, Friedrich Wilhelm Joseph Schelling, Jeremy Bentham, Anaxagoras, and Roger Bacon. After him are Epictetus, Zeno of Citium, Xenophanes, Giovanni Pico della Mirandola, Nicholas of Cusa, and Boethius.

Among PHILOSOPHERS In Belgium