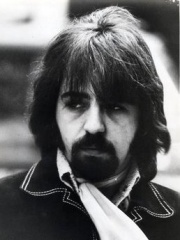 Clarence White (born Clarence Joseph LeBlanc; June 7, 1944 – July 15, 1973) was an American bluegrass and country guitarist and singer. He is best known as a member of the bluegrass ensemble the Kentucky Colonels and the rock band the Byrds, as well as for being a pioneer of the musical genre of country rock during the late 1960s.White also worked extensively as a session musician, appearing on recordings by the Everly Brothers, Joe Cocker, Ricky Nelson, Pat Boone, the Monkees, Randy Newman, Gene Clark, Linda Ronstadt, Arlo Guthrie, and Jackson Browne among others. Together with frequent collaborator Gene Parsons, he invented the B-Bender, a guitar accessory that enables a player to mechanically bend the B-string up a whole tone and emulate the sound of a pedal steel guitar. Read more on Wikipedia