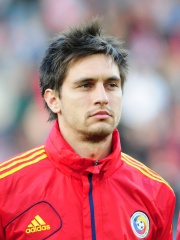 Anton Ciprian Tătărușanu (Romanian pronunciation: [anˈton t͡ʃipriˈan tətəruˈʃanu]; born 9 February 1986) is a Romanian professional footballer who plays as a goalkeeper for French club Lyon and the Romania national team. He started his senior career in Romania with Juventus București, going on to represent Gloria Bistrița and FC Steaua București in the country. Tătărușanu made over 180 appearances in all competitions for the latter, and in the summer of 2014 joined Italian club Fiorentina on a free transfer. Read more on Wikipedia

Since 2007, the English Wikipedia page of Ciprian Tătărușanu has received more than 302,621 page views. His biography is available in 30 different languages on Wikipedia making him the 3,406th most popular soccer player.