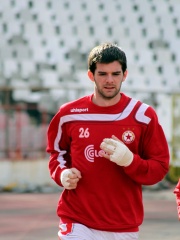 Cillian Sheridan (born 23 February 1989) is an Irish professional footballer who plays for Scottish Championship side Dundee. Sheridan began his career with Celtic in 2006, but a lack of first team opportunities saw him being loaned to other Scottish clubs. In 2010, he switched clubs and countries joining CSKA Sofia of Bulgaria, from where he was loaned to Scottish side St Johnstone in 2011. After playing for Kilmarnock between 2012 and 2013, he signed for defending Cypriot champions APOEL. Read more on Wikipedia

Among people born in 1989, Cillian Sheridan ranks 1,101. Before him are Ryan McGowan, Dewayne Dedmon, Mike Will Made It, Cassadee Pope, Arina Rodionova, and Junior Stanislas. After him are Joel Ward, Yuki Saneto, Braden Holtby, Brooke Candy, Yatsunori Shimaya, and Ederson Bruno Domingos.

Among SOCCER PLAYERS In Ireland