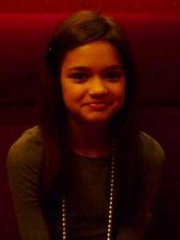 Ciara Quinn Bravo (pronounced ; born March 18, 1997) is an American actress. She is known for her role as Katie Knight on Big Time Rush and her role as Emma Chota on Red Band Society.Bravo's work as a voice actress includes Giselita in Open Season 3, Patty in Happiness Is a Warm Blanket, Charlie Brown, and Sarah in Special Agent Oso. Read more on Wikipedia

Since 2007, the English Wikipedia page of Ciara Bravo has received more than 1,240,603 page views. Her biography is available in 40 different languages on Wikipedia making her the 7,023rd most popular actor.