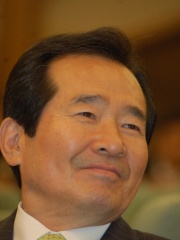 Chung Sye-kyun (Korean: 정세균; Hanja: 丁世均; born 5 November 1950) is a South Korean politician, former Speaker of the National Assembly, and the former Prime Minister of South Korea. He was previously leader of the main opposition Democratic Party between 2008 and 2010, and twice chairman of its predecessor, the Uri Party, first on an interim basis from October 2005 to January 2006 and then fully from February 2007 until the Uri Party's dissolution in August of that year. On 9 June 2016, he was elected to a two-year term as the Speaker of the National Assembly. Read more on Wikipedia

Among politicians, Chung Sye-kyun ranks 6,015 out of 15,710. Before him are Mieszko III the Old, Jan Syrový, Agnes of France, Duchess of Burgundy, Zhang Chunqiao, Chen Yun, and Rothari. After him are Belisario Betancur, Wacho, Myechyslaw Hryb, Helena of Moscow, Glaucus of Corinth, and Jacques-Charles Dupont de l'Eure.