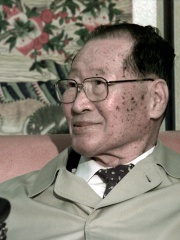 Chung Ju-yung or Jung Joo-young (November 25, 1915 – March 21, 2001), was a South Korean entrepreneur, businessman and the founder of Hyundai Groups of South Korea. Raised as the eldest son of a poor Korean farmer, he eventually became one of the world's richest men. Chung's business ventures were able to successfully endure through the difficult times of the Japanese occupation of Korea and later through the Korean War of the 1950s. Read more on Wikipedia

Since 2007, the English Wikipedia page of Chung Ju-yung has received more than 327,196 page views. His biography is available in 20 different languages on Wikipedia making him the 100th most popular businessperson.

Others born in Korea, North