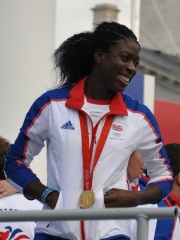 Christine Ijeoma Ohuruogu, MBE (born 17 May 1984) is a British track and field athlete who specialises in the 400 metres, the event for which she is a former Olympic, World and Commonwealth champion. The Olympic champion in 2008, and silver medalist in 2012, she is a double World Champion, having won the 400 m at the 2007 and 2013 World Championships. She has also won six World championship medals in the women's 4 x 400m relay as part of the Great Britain and Northern Ireland team (three awarded following disqualification for doping for other athletes) and bronze Olympic medals with the women's 4 x 400m relay at the 2008 Beijing Games and the 2016 Rio Games, her final Olympics. Read more on Wikipedia

Since 2007, the English Wikipedia page of Christine Ohuruogu has received more than 320,595 page views. Her biography is available in 26 different languages on Wikipedia making her the 4,875th most popular athlete.

Among ATHLETES In United Kingdom