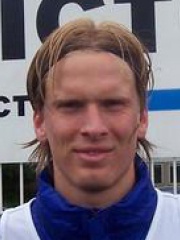 Christian Bjørnshøj Poulsen (born 28 February 1980) is a Danish former footballer. After starting his career with Holbæk, he played for a number of European clubs as a defensive midfielder, winning the Danish Superliga championship with F.C. Copenhagen, the German DFB-Ligapokal trophy with FC Schalke 04, and the European UEFA Cup with Spanish team Sevilla FC, later also playing for Italian Serie A club Juventus, as well as Premier League side, Liverpool, French side Evian, and Dutch side Ajax. He has been a regular member of the Denmark national football team since his debut in 2001, and has played 92 matches, scoring six goals for his country. Read more on Wikipedia