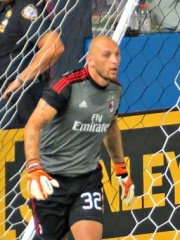 Christian Abbiati (Italian pronunciation: [ˈkristjan abˈbjaːti]; born 8 July 1977) is an Italian former professional footballer who played as a goalkeeper. Abbiati, who had been with A.C. Milan since 1998, started his career with Monza, and later played more than 300 official matches for Milan. He also spent loan spells at Borgosesia Calcio, Juventus, Torino and Atlético Madrid. Read more on Wikipedia

Since 2007, the English Wikipedia page of Christian Abbiati has received more than 440,567 page views. His biography is available in 44 different languages on Wikipedia making him the 1,469th most popular soccer player.