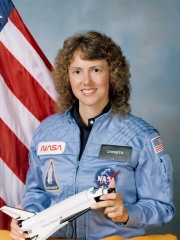 Sharon Christa McAuliffe (née Corrigan; September 2, 1948 – January 28, 1986) was an American teacher and astronaut from Concord, New Hampshire, who was killed on the Space Shuttle Challenger on mission STS-51-L where she was serving as a payload specialist.She received her bachelor's degree in education and history from Framingham State College in 1970 and her master's degree in education, supervision and administration from Bowie State University in 1978. She took a teaching position as a social studies teacher at Concord High School in New Hampshire in 1983. In 1985, McAuliffe was selected from more than 11,000 applicants to the NASA Teacher in Space Project and was scheduled to become the first teacher to fly in space. Read more on Wikipedia

Among astronauts, Christa McAuliffe ranks 37 out of 524. Before her are Georgy Dobrovolsky, Roger B. Chaffee, Alan Bean, Frank Borman, John Young, and Ellison Onizuka. After her are Kalpana Chawla, Vladislav Volkov, Valeri Kubasov, Fred Haise, Vladimir Dzhanibekov, and Vladimir Shatalov.