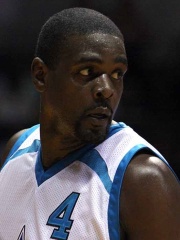 Mayce Edward Christopher Webber III (born March 1, 1973) is an American former professional basketball player. He is a five-time NBA All-Star, a five-time All-NBA Team member, a former NBA Rookie of the Year, and a former number one overall NBA draftee. As a collegiate athlete, he was a first-team All-American and led the Michigan Wolverines' 1991 incoming freshman class known as the Fab Five that reached the 1992 and 1993 NCAA Men's Division I Basketball Championship games as freshmen and sophomores. Read more on Wikipedia

Since 2007, the English Wikipedia page of Chris Webber has received more than 3,583,181 page views. His biography is available in 30 different languages on Wikipedia making him the 211th most popular basketball player.