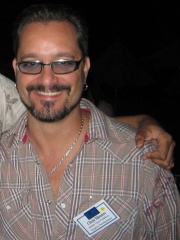 Christopher Vincent Metzen (born November 22, 1973) is an American game designer, artist, voice actor, and author known for his work creating the fictional universes and scripts for Blizzard Entertainment's three major award-winning media franchises: Warcraft, Diablo and StarCraft. Metzen was hired by Blizzard Entertainment as an animator and an artist; his first work for the company was with the video game Justice League Task Force.Metzen was the Senior Vice President of Story and Franchise Development at Blizzard Entertainment and assisted the company's projects by providing voice talent for a number of characters, most notably the orc character Thrall, as well as contributing to artistic character design. Read more on Wikipedia

Among game designers, Chris Metzen ranks 52 out of 46. Before him are Jordan Mechner, Tim Schafer, Chris Sawyer, Michel Ancel, Éric Chahi, and Michael Morhaime. After him are Tom Hall, Matt Harding, Adrian Carmack, and Mike Harrington.