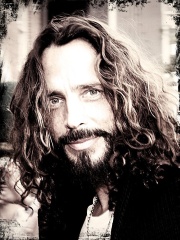 Christopher John Cornell (né Boyle; July 20, 1964 – May 18, 2017) was an American singer, songwriter, and musician, best known as the lead vocalist and rhythm guitarist for the rock bands Soundgarden and Audioslave, and for his numerous solo works and soundtrack contributions. Cornell was also the founder and frontman of Temple of the Dog, a one-off tribute band dedicated to his late friend Andrew Wood. Cornell is considered one of the chief architects of the 1990s grunge movement, and is well known for his extensive catalog as a songwriter, his nearly four-octave vocal range, and his powerful vocal belting technique. Read more on Wikipedia

Since 2007, the English Wikipedia page of Chris Cornell has received more than 17,967,254 page views. His biography is available in 44 different languages on Wikipedia making him the 234th most popular singer.

Among singers, Chris Cornell ranks 234 out of 3,001. Before him are Mariska Veres, Sam Cooke, Robbie Williams, Beyoncé, Tarkan, and Sade. After him are Frida Boccara, Van Morrison, Sonny Bono, Lil Wayne, Gene Vincent, and Lucia Popp.