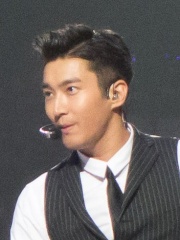 Choi Si-won (Korean: 최시원; Hanja: 崔始源; born 7 April 1986), known mononymously as Siwon, is a South Korean singer, songwriter, model, and actor known for his work as a member of South Korean boy group Super Junior. Choi committed as special representative of UNICEF Korea for children’s issues over the last four years before he was chosen as UNICEF regional ambassador for East Asia and Pacific in November 2019.Aside from being a member of Super Junior, Choi has also ventured into solo activities, mainly acting. Read more on Wikipedia

Since 2007, the English Wikipedia page of Choi Si-won has received more than 1,778,344 page views. His biography is available in 22 different languages on Wikipedia making him the 5,911th most popular actor.