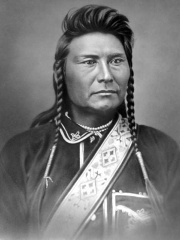 Hin-mah-too-yah-lat-kekt (or Hinmatóowyalahtq̓it in Americanist orthography), popularly known as Chief Joseph, Young Joseph, or Joseph the Younger (March 3, 1840 – September 21, 1904), was a leader of the Wal-lam-wat-kain (Wallowa) band of Nez Perce, a Native American tribe of the interior Pacific Northwest region of the United States, in the latter half of the 19th century. He succeeded his father Tuekakas (Chief Joseph the Elder) in the early 1870s. Chief Joseph led his band of Nez Perce during the most tumultuous period in their history, when they were forcibly removed by the United States federal government from their ancestral lands in the Wallowa Valley of northeastern Oregon onto a significantly reduced reservation in the Idaho Territory. Read more on Wikipedia

Among politicians, Chief Joseph ranks 11,031 out of 15,710. Before him are Bernhard Hammer, Demophon of Eleusis, Nikol Pashinyan, Charles Pasqua, Manuel Gómez Pedraza, and Thomas Howard, 2nd Duke of Norfolk. After him are Bodo Ramelow, Wee Kim Wee, Joseph Daul, Peada of Mercia, Renseneb, and Yakubu Gowon.