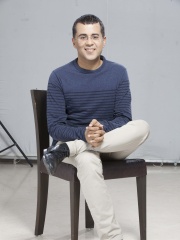 Chetan Prakash Bhagat (born 22 April 1974) is an Indian author and columnist. He was included in Time magazine's list of World's 100 Most Influential People in 2010.Bhagat graduated in mechanical engineering at IIT Delhi and completed an MBA at IIM Ahmedabad. He started his career as an investment banker, but left it after a few years to pursue his passion in writing. Read more on Wikipedia

Since 2007, the English Wikipedia page of Chetan Bhagat has received more than 3,353,598 page views. His biography is available in 24 different languages on Wikipedia making him the 4,845th most popular writer.

Among writers, Chetan Bhagat ranks 4,837 out of 4,883. Before him are Somaly Mam, Al Roker, Rita Dove, Rebecca Walker, Snooki, and Espido Freire. After him are Eleanor Catton, Denise Mina, Edwidge Danticat, Kelly Link, Hitomi Kanehara, and Will Self.