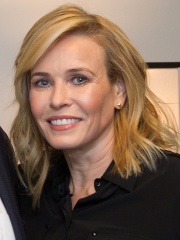 Chelsea Joy Handler (born February 25, 1975) is an American comedian, actress, writer, television host, producer and activist. She hosted the late-night talk show Chelsea Lately on the E! network from 2007 to 2015, and released a documentary series, Chelsea Does, on Netflix in January 2016. Read more on Wikipedia

Since 2007, the English Wikipedia page of Chelsea Handler has received more than 5,641,808 page views. Her biography is available in 21 different languages on Wikipedia making her the 7,790th most popular comedian.

Among comedians, Chelsea Handler ranks 84 out of 8. Before her are Steven Wright, Kristen Schaal, Dane Cook, Bill Burr, B. J. Novak, and Aziz Ansari. After her are Nick Kroll, Mitch Hedberg, Kenan Thompson, Ralphie May, Carrie Brownstein, and Bo Burnham.