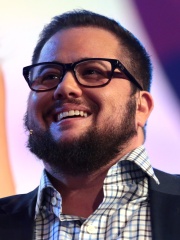 Chaz Salvatore Bono (born Chastity Sun Bono; March 4, 1969) is an American writer, musician and actor. His parents are entertainers Sonny Bono and Cher, and he became widely known in appearances as a child on their television show, The Sonny & Cher Comedy Hour.Bono is a trans man. In 1995, while then identifying as a woman, and several years after being outed as lesbian by the tabloid press, Bono publicly self-identified as a lesbian in a cover story in a leading American gay monthly magazine, The Advocate. Read more on Wikipedia

Among writers, Chaz Bono ranks 5,022 out of 5,794. Before her are Farley Mowat, Gunnel Vallquist, Jodi Picoult, Rói Patursson, James Herbert, and Can Dündar. After her are Judy Blume, William Wallace Denslow, Javed Akhtar, Theodore Roethke, Kenneth Rexroth, and Oksana Zabuzhko.